"Constellation" in the Snow 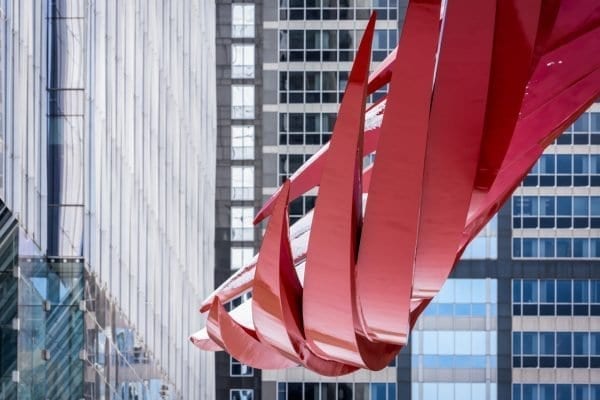 And, I’m back for more shots of Calatrava’s Constellation sculpture at River Point Park. You’re all gonna get sick of me constantly shooting this, lol. But I couldn’t resist the bright red against the snow and the snow on its “feathers”. I stopped by last Thursday, but given my schedule and the sun deciding to […] 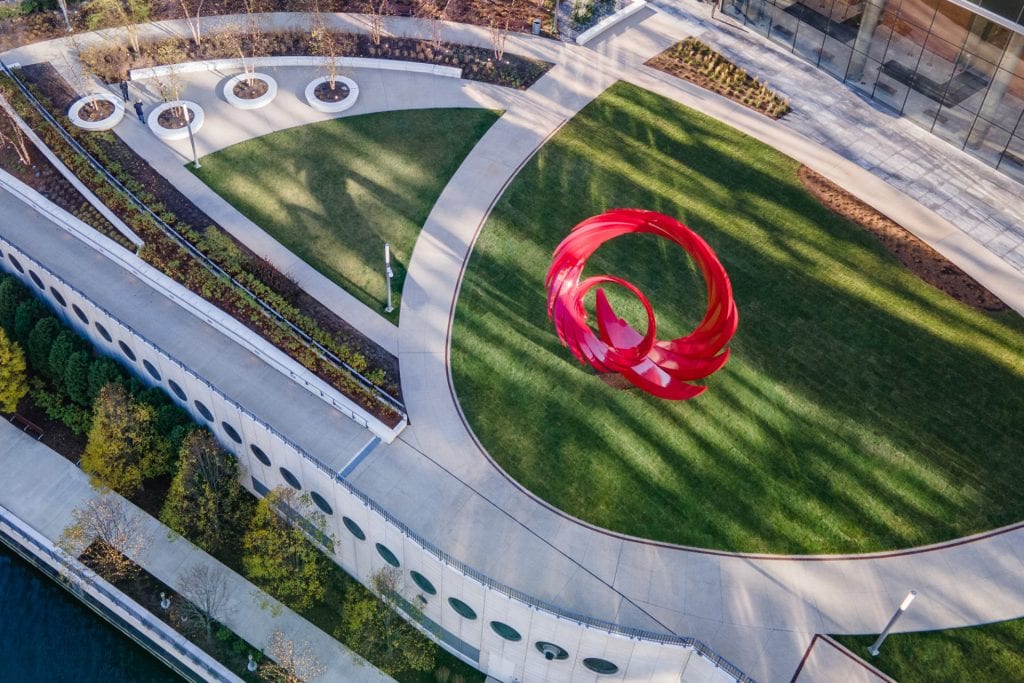 I recently took (and passed 😉 ) the FAA drone pilot certification exam (Part 107) so this will be a fun addition to upcoming shoots! To get a little practice, I thought I’d go back to Calatrava’s Constellation sculpture at River Point. Fun shooting here this way. Here are a few takes… This last one, […] 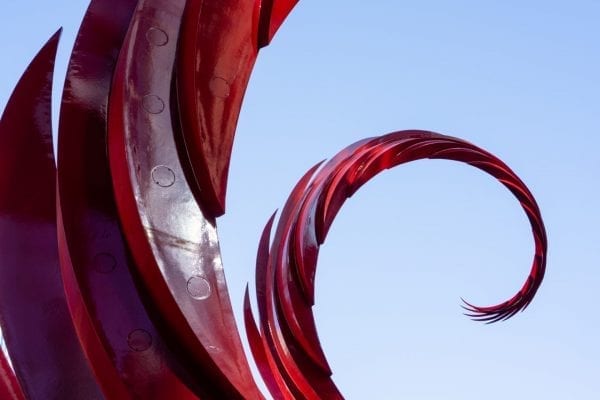 So excited for a new piece of design here in Chicago! The long-awaited Constellation sculpture by Santiago Calatrava! I still find it hard to believe we haven’t had anything by the starchitect until now. Granted, the incomparable Milwaukee Art Museum is nearby but it’s not the same as having something by him right at home. […] 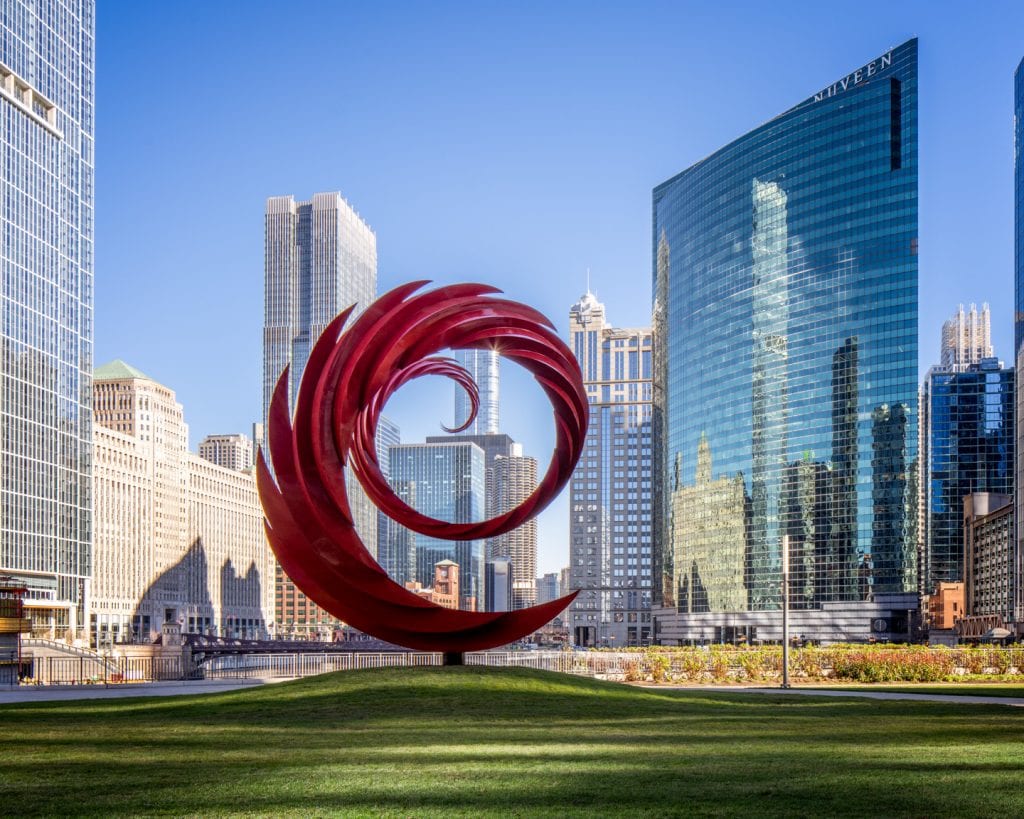 Chicago finally has a little something from Santiago Calatrava! His sculpture Constellation has just been completed at River Point Park. The vibrant red of the sculpture is the perfect contrast against the glassy blue towers surrounding the area. The swirly red has a leaf-like motif or if his past designs and inspirations come into play […]

Constellation, Take I by Santiago Calatrava 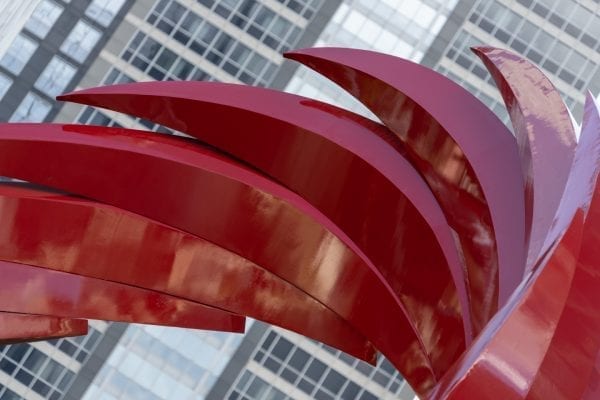 Chicago is finally getting a little something by Santiago Calatrava! For a long time, the closest piece of architecture we’ve had from him is the Milwaukee Art Museum, which, of course, is one of his best! While not nearly close to this scale, we’re having a sculpture titled Constellation installed at River Point Park. I […]

A couple months ago a spent some time in Europe. After a flight into Lyon, I took the Lyon-Saint-Exupery train to Grenoble. The train station is a short walk from the airport and designed by acclaimed architect, Santiago Calatrava. Like many of his designs, there’s a strong resemblance to a bird in flight. However, unlike […] 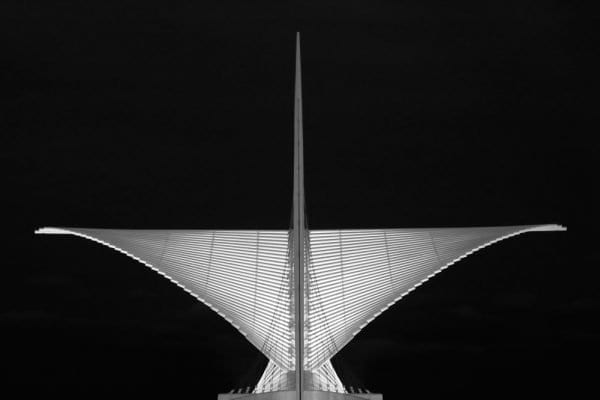 A short trek outside of Chicago is one of our favorite photo locations, the Milwaukee Art Museum designed by Santiago Calatrava. This place is a little special to me as it’s one of the first architecture locations to really draw me into photographing this subject matter. For a long time, the image below was a […]

Continuing on my bike ride along Toronto’s lakefront there were two interesting bridges to photograph. The one above is an abstract of the Santiago Calatrava designed Mimico Creek Pedestrian Bridge. And the only decent image I managed to make of this. The stop just before this bridge was the Humber Bay Arch Bridge designed […]

A few weeks ago I spent an afternoon at one of my favorite buildings – the Milwaukee Art Museum designed by Santiago Calatrava. When I teach, people often ask if I revisit locations I’ve previously shot and the answer is a definite yes! There are many reasons why: The way you see photographically evolves over […]