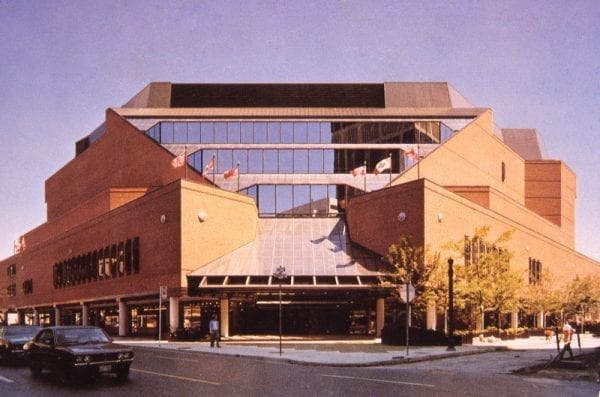 One of our favorite Toronto locations is the Reference Library located in the Yorkville neighborhood. The building was designed by Raymond Moriyama and was completed in 1977.  At that time and still today, it was/is Canada’s largest public reference library. The design of the building definitely feels like stepping back in time. The exterior is […] 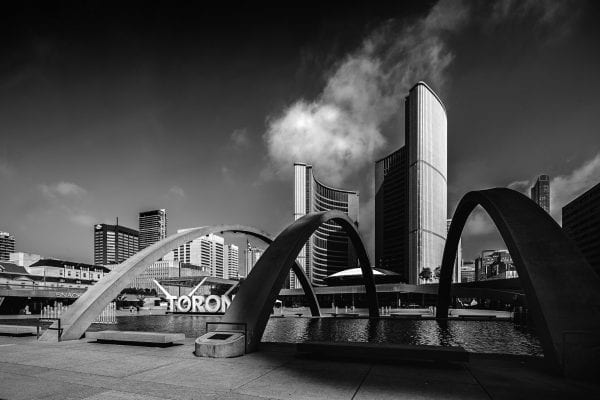 Today, we’re sharing our favorite brutalist designs in Toronto, its City Hall. Built in 1958, the city launched a competition for a “futuristic” design. Finnish architect, Viljo Revell, won that competition and designed two curved tall towers, each a different height (20 & 27 stories) that seem to cradle the council chamber, which, honestly, looks […]

Saving my favorite for last, all those curves at the Toronto Reference Library. Only the second time I’ve visited here, yet another location with a great staircase. There are a number of ways to shoot this, both focusing on the curves and the angles because there are many of both. I prefer the curvy […]

Sticking with the black & white theme and Toronto’s Yorkville neighborhood, though moving from One Bloor East’s curves to the angles of our next two stops: The Royal Ontario Museum (ROM) and Exhibit Residences. These two are neighbors, just across the street from each other. We focused our attention on the museum extension designed by […]

A new location for me! It’s rare to photograph something for the first time on a workshop since we have a tendency to scout places first to make sure they’re a good fit for the workshop. But sometimes you just know a building will be worth it. One Bloor East is a new luxury condo […]

Still much to share from Toronto. Today is a mix of various locations around the city, all having sharp angles in common. The first is a condo in the Entertainment District. This wasn’t originally on our list but one of the students wanted to stop for a few shots. Great staggered balconies on this one, […]

Toronto has a good amount of Brutalist Architecture, most predominantly its City Hall. Full of curves from a sculptural area in the plaza to the actual highrise buildings in the background. Here you see some details from a distance. I often think brutalist architecture looks good in black and white given its coldness from […]

Blue is common to come across in architecture, in large part due to the blue sky reflecting in all those glassy buildings. Then, on occasion, due to my love of the color and altering the white balance in some shots (read more here on how/why). Like you see below and above in the Allen Lambert […]

Time for another revisit…

The Art Gallery of Ontario (AGO) is just one of those places that never gets old. As I’m sure you’re aware, I can’t get enough of good spiral staircases and the Frank Gehry design at the AGO is one of the best I’ve ever seen. It’s made of this beautiful Douglas Fir; the color is […]